This original handmade stitched wool canvas entitled ‘Self-Forgiveness through Making’ explores how self-forgiveness can be such a beautiful aspect of loving ourselves. This is the simplicity of practicing self-care.

Can we accept ourselves for all of who we are? This piece explores one of the key aspects of self-care: self-love. Can we accept all of ourselves? All those little annoyances, aggravating bits alongside all those parts of us that we love. Being human inevitably means making mistakes, messing up and saying things we regret. Can we lay it all out, all those aspects we adore and all those aspects we’d rather not have, and simply love ourselves for being us? In this piece, a use traditional Quipu knots (from the Andean people) to represents all those aspects we love a lot and not so much. When brought together, knots and all, this piece almost sings in utter beauty and perfection. We are perfection indeed.

I started this piece by simply beginning to knot. In some ways, in reminds of rosary beads, or a type of meditation. As you move the thread through your fingers repetitively, you begin to unwind from your day and ponder the meaning of things… 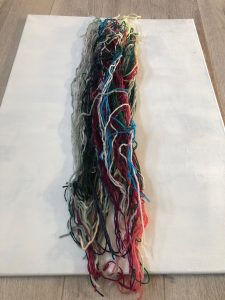 So as I knotted I began playing around with the threads, the colours, the amount of knots. I began stitching them into the canvas, looking at them from back and front. I couldn’t help but in awe at how all these knots looked together and worked together. I even became interested in how the threads fell at the back the piece. Was I looking at the piece, as well as myself, from all these angles? 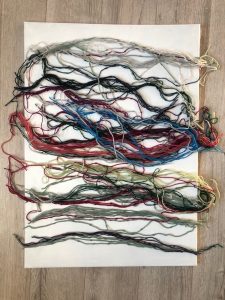 I began considering all those little internal knots. What about all those pieces of myself that I would rather hide? Those little knotty awkward, harsh, fearful, perfectionist bits? Rather than keep those inside, how about I re-create them in the knots and threads? 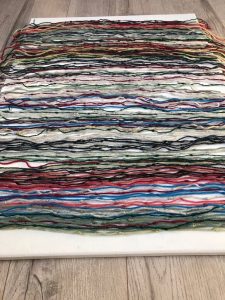 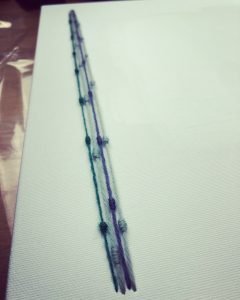 I realised that I could not see one piece in isolation, but rather as the whole of me. With each out and available for viewing, I began to see that it was all me. How could I have aspect without the other? How could I pick and choose humanities traits that I preferred or didn’t like. 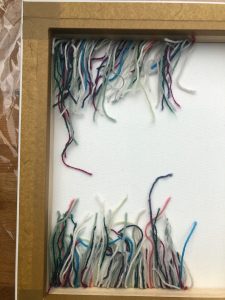 As it was completed, it almost began to sing. All aspects working in harmony. I couldn’t single out one piece anymore, it was all one. It felt as though I could accept all those part of me. Forgive and even welcome all of those aspects I was sure I’d rather get rid of. 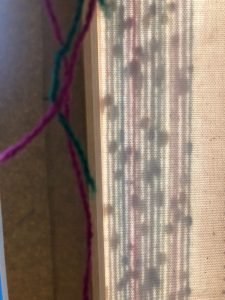 Perhaps we are made to perfection. Perhaps there is nothing ‘wrong’ with us. Perhaps it is a life time of accepting, forgiving, loving and caring for ourselves. What is that was possible….. 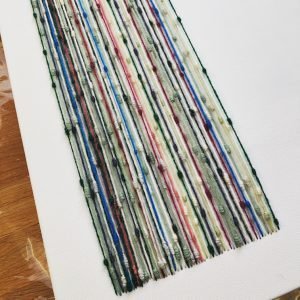 Giving Back to Plant Trees